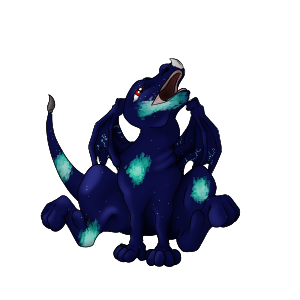 From the Death Court Hatching

The first to hatch was a large, speckled egg from Nemondath’s clutch. All of her eggs were darker coloured than her sisters’. That seemed to be where the differences ended. Each queen had a near equal amount of eggs, and all of them had a few that were a fair amount larger than the others.

From the shattered shell pieces tumbled a body so dark that Takith narrowed her eyes and growled.

::Calm yourself, sister dear,:: Nemondath replied with a tone that spoke of infinite patience. She bent her head to nuzzle the little hatchling, causing it to roll on its back and reveal bright, almost luminous patches of blue. ::He’s not black. He’s blue.::

The hatchling lifted his head and chirped up at Nemondath, seemingly confused by his surroundings. At an encouraging nod from the dark queen, he gathered his feet beneath himself and wobbled at a hurried pace over to a towering black dragoness lurking near the peace delegation. Faint drifts of purple smoke lingered in the air around her.

::Mother! You are not my mother, but you are my Mother! I am Kemelth and I am yours!::

With the first bonding made, the air in the cavern seemed to lighten, and noise crept in around the edges once more. Three more eggs cracked and split on the sands, and a few of the candidates crowded closer to see the new hatchlings.